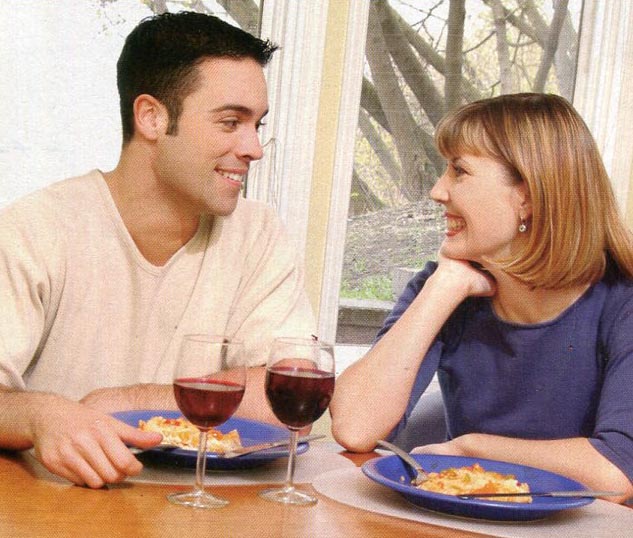 In the picture I can see a couple sitting at the table and talking. In the foreground of this photograph it is easy to notice a long, wooden and well – polished table shining in the light. The man is a bit to the left of the image. He is probably in his late twenties. I guess so because he has got smooth, handsome face and casual clothes. I am not sure but he might be of Spaniard origin. I assume it taking into consideration his black eyebrows as well as coal black, neatly trimmed hair. As far as I can see the young man is wearing a loose, whitish T-shirt and no jewellery on his wrist or fingers. He is smiling warmly and turning his head a bit aside to look straight at the woman who is accompanying him. The woman might be slightly older than the man: I presume it though she looks quite attractive. Nevertheless, her eyes are rounded by tiny wrinkles while she is smiling and her make-up is rather suitable for the woman in her thirties than a younger one. The woman has got fair, shoulder length hair with a quite long fringe. She is also wearing silver ear-rings, probably with small jewels inside. They do not look very smart – just casual jewellery. I must admit they match the blouse being worn by this woman – it also seems to be an everyday one: greyish and navy blue. The woman is staring carefully at her companion, smiling – she has put her head on her left palm-hand. The people must be very happy. They seem to have finished eating some pasta and they both have drunk some wine. I am able to see glasses with red wine inside placed in front of them.

In the foreground of the picture there is a branchy tree that might be observed in the window framework.

1.
I am certain the people are sitting in their own house. Although many restaurants nowadays are family – style ones I do not think they own such common, pine tables and blue, plain plates. When people go out they want to feel exceptional – they wear smart clothes, they order excellent food and behave artificially. The people in the picture seem to be behaving on the contrary – they are wearing mere clothes, the dish resembles rather pasta with a tomato sauce than seafoods or other fanciful meal, their behaviour is probably very natural and the ambience seems to be friendly and just domestic. That`s why I would be very surprised if I found out they were celebrating something at the restaurant – it would have been a very home-like one!

2. I think most people in Poland prefer going out to the restaurant or to the club on special occasions. It is problably connected with small flats many people live in (it would be just logistically difficult to invite the whole family to 50 sq.m for, for instance, baby`s baptism ceremony) and with new trends upcoming from Western Europe. Some social groups are getting richer and richer and they do not want to live the way their ancestors did – they are open for new tastes, new experiences and new places. Obviously, they are able to afford all of these pleasures. Some people, even not the wealthiest ones, balance pros and cons and invite their guests to the restaurant because they are aware it will save them all troubles referring to tidying the house up, washing up, paying up the bills for electricity, gas and water. Eventually, it may occur to be a good investment, especially if one is able to meet some business partners at such a party out.
Or:
Actually, I do not know anybody who celebrates at the restaurant. Therefore I am sure it is very rare habit in Poland. The reason is simple in my humble opinion: the Poles are just to poor and mean to spend money on eating out. You must remember people used to eat out even more seldom prior to 1989 and frankly speaking as regards the older – not much has changed recently. An overwhelming majority of people still have traditional dining habits – they are not eager to test new places. The only form of gastronomy that has gainted some popularity in recent years is pizza delivered at home – and this is the meal most people eat on special occasions ;-).