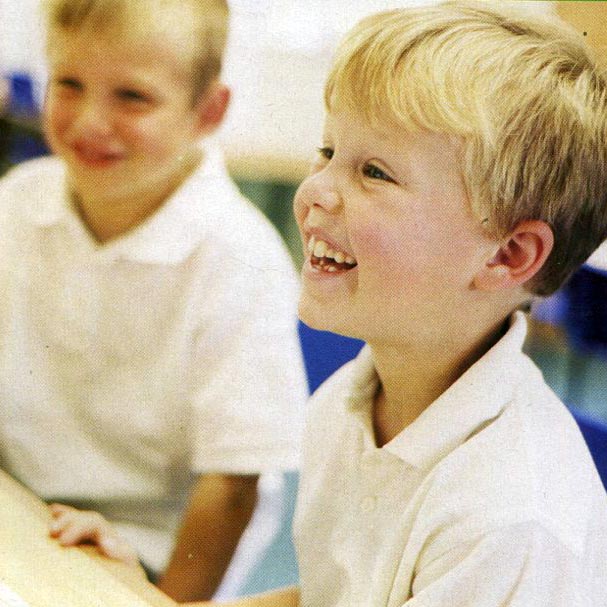 This picture is a close-up of two boys. Both of them are wearing identical, white polo shirts – therefore I assume they attend the same school and the shirts are their school uniforms. The boys have got neatly trimmed, fair hair. The one in the foreground can be seen very well. His companion in the background of the picture, a bit to the left of the frame, is vaguely seen and I can only guess most details of his appearance. In my opinion it is obvious the author of the picture was going to take the photo of the boy situated on the right. The boy has got quite narrow, dark eyes, childish nose, blushed cheeks and he is smiling cheerfully opening his mouth wide and showing two rows of white teeth. The boy seems to be very nice and natural. His friend has got a bit protruding ears and at first sight he is not so likable. Although I can see only his left ear I suppose they are symmetrical and the right one looks exactly the same. The boys are attentively staring at the computer screen in front of them. I am unable to see the screen itself but I am sure it is situated on the left-hand side as there is something grey seen and I can recognize a white keyboard at the bottom of the picture. The boys seem not to be touching the keyboard, though I am not sure about it as the one on the left-hand side is keeping something behind the framework of the image. Even though, they might be using a joystick or a computer mouse to operate the computer in front of them.
In the background of the picture I can see navy blue desks and fawn and tawny board but the image is not very clear so most of the details I must guess.

1.
As I have mentioned before, the boys are sitting in front of the computer screen. Taking into consideration the background of the picture I can assume they are at school, probably having IT lesson. They must be doing something both of them enjoy very much. As far as I know something about teenagers` interests they are probably playing a computer game or surfing the Internet. Most of the kids I have met in my life were keen on such activities. I guess the boys are either playing the game of surfing the Internet as their faces show enthusiasm, happiness and the highest stage of concentration I can imagine at their age. I do not think they are more than twelve years old and that is why I suppose they have rather chosen playing a computer game, especially that the boy in the foreground seems to be completely focused on the activity he is doing. I do not assume pupils at such age are able to concentrate on the websites so much. Moreover, as I have mentioned before the boys are not touching the keyboard as far as I can see – since I conclude they might be using a joystick. It is an item usually used while playing computer games.

2.
In my opinion computer games shoud be strictly forbidden until you are sixteen or more. Computer games have become a matter of course for most contemporary teenagers and I do not suppose there is any good in it. The kids cannot play outside, they are couch potatoes, most of them suffer from overweight and loosening family ties. These children seem to be very unhappy and lonely though they are not aware of it, I guess. Moreover, computer games are supposed to be responsible for the growth of violence among young people. Last but not least, they are thought to be responsible for the so-called ”clash of the cultures” – the culture of IT instructors and contemporary teenagers’ parents and their children who, not so rarely, surpass the computer literacy of the adults. The fact may be misleading and can make the children think they do not have to possess any educational background as they have already climbed the top. I strongly disagree with such point of view.
Or:
I think everything, including computer games, is for people and should not be restricted as fas as it does not break the law and is not harmful for its users. The computer games, so often regarded as sources of all evil in the world, are also source of knowledge in my humble opinion necessary to exist nowadays. The fact that almost all computer games demand complex cognitive skills from the people who use them (making it simple – the wiser user the most thrilling game) is frequently neglected as well as the fvact that computer games teach its users reflection, survival techniques and expand their imagination. Certainly, everything depends here on the type of the game and age of the user but I would strongly protest against all generalizations like ”computers are not for kids”. As far as I am concerned they are mostly for kids as these are today`s teenagers the people whose imagination and creativity will make the future world for all of us.